PaperFaces was an iPad drawing project by time traveling designer and illustrator Michael Rose — that’s me! It began in August 2012, when I started drawing portraits on my iPad using the Paper by FiftyThree app and ended exactly two years later.

The lastest batch of PaperFaces drawings along with in process sketches for each can be found at /paperfaces.

In order of most to least asked…

Will you draw me?

Unfortunately I am no longer taking volunteers for the project. If you’d like to commission me to illustrate your Twitter avatar, recreate a photograph in my PaperFaces™ style, draw your pet dinosaur, or whatever, follow the link below. I’m currently taking a break from drawing portraits as well.

PaperFaces is the name that I coined for the portraits I was drawing with the Paper by 53 iPad app. Most of the Paper creations share the #MadeWithPaper hashtag, so I thought PaperFaces would fit in with that theme and decided to start tagging each portrait with it.

One night, out of sheer boredom, I decided I’d try to recreate my wife’s Twitter avatar with Paper by 53. The positive response that resulted from that drawing prompted me to create one of my own avatar, which also went over well with my small group of Twitter and Instagram followers.

Due to the positive comments that I received, I decided to put a call out for more portrait volunteers. Without really considering the implications of my actions, I posted the following:

A few hours later, while grocery shopping with my wife, my iPhone started blowing up with retweet and @reply notifications. By the end of the day I had amassed around 300 volunteers and figured that turning it into a formal 365 day project might be fun.

When the count hit 700, I revised my initial goal of 365 to 730 (that’s two a day for a year), due to the increased demand and not wanting to let anyone down. At around the same time, I started getting inquiries about the project, and whether I was accepting donations. At the suggestion of friends and some newfound supporters, I published this page to better explain the project and added PayPal buttons on the site for those who wanted to motivate me to keep the project going.

Why the blank faces?

When I began the project I attempted to draw each face as detailed and accurately as possible. Even though I’m classically trained in illustration and the fine arts, photo realism isn’t really “my bag.” Part of what attracted me to Paper by 53 was its small tool set, lack of zoom, and focused color palettes. Trying to interpret each portrait using these constraints helped me to stumble across the whole “blank face” look and grow as an artist.

After drawing over 600 portraits with Paper my skills have matured and I’ve begun drawing the entire face. It has been a fun personal challenge to capture as much detail in as little time possible.

It all starts with a list. If there are paying commissions in the queue, I work on those portraits first. With over 2,300 portrait requests, I need a way to accurately check who has retweeted my initial post. I use Favstar.fm to view all my retweets and determine who is next, then grab their Twitter avatar and save it to my iPhone’s camera roll. It’s by no means a perfect system, and requests do fall through the cracks, but it’s the best I’ve come up with so far.

Next, I fire up Paper on my iPad, draw a black square with the pen tool, and start roughing out the illustration with the pencil tool. What works well for me is resting an iPhone right on the iPad’s screen so I can reference the original photograph as I draw. This allows me to relax in my living room with the family, instead of sitting at a desk in a studio.

Upon the portrait’s completion, I share it from within the Paper by 53 app to Twitter and Tumblr, repost a cropped version to Instagram, and @reply the volunteer to notify them. If they donated or ask nicely, I send them a larger sized version in case they’d like to print it out. Using Evernote, I mark the drawing complete in my fancy PaperFaces notebook and move on to the next portrait.

And yes, I use a stylus. For the first 50 or so portraits I drew exclusively with a Just Mobile AP-818 Universal AluPen Stylus until the tip wore out. I moved on to a LunaTik Alloy Touch Pen Stylus/Ink Pen and am now using a Pogo Connect Bluetooth 4.0 Smart Pen with all that pressure sensitive goodness.

When are you going to stop?

At the moment, there is a waiting list of over 2,000. Now I know what you’re thinking, “this dude is never going to draw all those.” Well, you’re probably right. Though I am making progress and have drawn just shy of 886 finished illustrations.

Working my day job as a designer, then spending the rest of the evening with my wife and twin baby girls doesn’t leave much free time. Since this project is a fun diversion for myself, I allot a few hours each night to draw a portrait or two. On average most portraits take me 1–2 hours to complete. It really depends on the complexity of the original photograph and how much detail I’m trying to capture.

Each PaperFaces portrait is protected under a Creative Commons License. That means they’re free to use as avatars, share on social media, or print for personal use only.

I use the term “tutorial” loosely. What you’ll find here are glorified slide shows highlighting various stages of PaperFaces drawings. To create these I take periodic screenshots on the iPad and then generate a slide show with them using Aperture for Mac OS X. It’s not quite the same thing as a true speed painting video, but it does show how I attacked each of these portraits. I’ve also documented my process in the written form, if reading is your thing.

I’ve recently discovered Reflector which allows the screen of an iOS device to be mirrored on a Mac or PC via AirPlay. True speed painting videos here I come!

View more of my Paper by FiftyThree video tutorials on YouTube or read how I use Paper.

I’ve been completely humbled by all the support and attention coming my way since I started this project. Drawing someone’s portrait and having them thank you by returning the favor is all kinds of amazing. I’m featuring those drawings here, along with any that follow the “PaperFaces style.” If you want your drawing(s) to be included leave a comment below (include your drawing in the comment) or tweet me.

Just sharing the love with some links back to articles and galleries that have featured my PaperFaces artwork and story.

Since starting PaperFaces I’ve received a few inquiries on my illustration techniques — so I wrote a guide for you called Mastering Paper. You’re welcome! 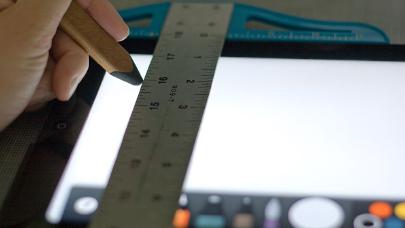 To draw straight lines on the iPad in apps that don’t have a ruler tool, I use whatever straight edge I have laying around: plastic ruler, book cover, piece of cardboard, notepad, etc.
How did I git gud at drawing and painting on an iPad? The answer that no one likes to hear is “practice, practice, practice. 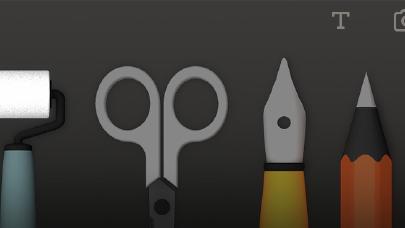 How to switch tools in the app Paper for iPad and iPhone.
A smooth gradient can be achieved layering washes of watercolor on top of each other. Speed and pressure play an important role in how clean of a tone you end up with.